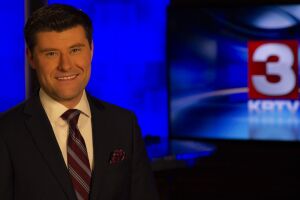 Jason is a native Montanan, born and raised in Billings.

The Big Sky State also sparked a big fascination with weather and storms. Montana provided the perfect backdrop to race down the highways, searching for the next incredible phenomenon.

While many were running inside to avoid the storms, Jason ran into the heart of them, eager to learn more. From storms to sound booths, Jason’s broadcasting career started with radio. It was a venture he took on right after graduating high school.

In 2012, Jason hit the big screen… well, maybe just the green screen, but it’s where his television career got its roots. He served his hometown for years, all while continuing his education through Mississippi State University.

Jason chased storms all the way down to Colorado Springs, where he’s called home for three years. But, as we all know, nothing tops those Montana skies, and Jason was drawn back to the Treasure State.

This time, though, Great Falls will be his home. In his spare time, Jason enjoys most outdoor activities. He has a passion for hunting and spending time up in the mountains.

If you see a storm heading our way, you can be sure Jason will be at the heart of it.