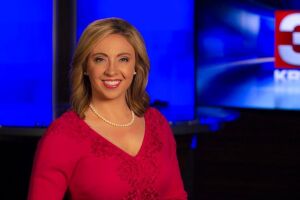 First starting at KRTV as a news intern in the summer of 2005, Shannon returned in the summer of 2007 as the weekend weather anchor. After graduating college in 2008, Shannon returned to KRTV as a part-time morning weather anchor. Since then, her roles and responsibilities have grown. She spent three and a half years waking up “dark and early” for Montana This Morning to give the morning forecast and eventually produce and anchor the show, as well as reporting. In 2012, Shannon exchanged the early mornings for late nights to report, produce and anchor the evening shows.

Shannon is the creator, producer and host of Five Under 35. The program began in 2014 and recognizes five people under the age of 35 each year who are making Great Falls an even better place to live. Shannon created the initiative to boost morale and start conversations about what is going well in Great Falls, and how the community can improve specifically when talking about the young adult population. Five Under 35 has been nominated multiple times for the “Citation of Outstanding Community Service” from the National Academy of Television Arts and Sciences, Northwest chapter.

Shannon has also been recognized for her reporting and anchoring by the Society of Professional Journalists and the Montana Broadcasters Association.

One of Shannon’s favorite parts of her job is the opportunity to interact with the community. She’s served as an emcee for Race for the Cure and the Russell Runway Fashion Show, interviewed Ted Turner as part of MSU Northern’s commencement ceremony, co-hosted the Shodair Children’s Hospital telethon, spoken to students and groups about her job, shared her family’s journey with cancer at Camp Francis, a bereavement camp for kids, among other things.

Originally from Kansas City, Shannon’s family moved from Kansas to Montana right before she started high school. After graduating from Havre High School, Shannon continued her education and ran cross-country at Whitworth University in Spokane, Washington. She graduated with a degree with Journalism and Mass Communication and minors in Leadership Studies and Psychology.

When she’s not working, Shannon is spending time with her rescue dog Watson. You can follow their adventures on social media using #wanderingwithwatson.