An Exhibition 100 Years in the Making

RETURN TO CALGARY Charles M. Russell and the 1919 Victory Stampede

At the apex of Charles M. Russell’s career, he and his wife Nancy Russell shipped 24 paintings and 8 bronzes to Calgary for the 1919 “Victory Stampede” in honor of the troops returning home from the Great War. These were some of his best works from the height of his career, and they have never been together until now.

“Return to Calgary” reunites 22 of the original 24 paintings and all 8 of the bronzes from 15 lenders across the U.S. and Canada for a once-in-a-lifetime exhibition, marking the 100th Anniversary of Charles M. Russell’s special exhibition in Calgary. 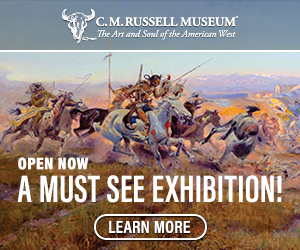 KRTV offers useful, valuable information from select sponsors on these pages. This content is not produced or endorsed by KRTV News. To learn more about being a Sponsored Content provider on this site, contact our digital sales specialists.

Brand Spotlight offers useful, valuable information from select sponsors on these pages. This content is not produced or endorsed by this station.