A seven-month "60 Minutes" investigation into Allegiant Air,the Las Vegas-based ultra-low-cost carrier, found more than 100 serious incidents involving mechanical issues. The airline issued a brief statement to CBS News before the story aired, but in a response posted after the airing and in an internal memo, the airline alleged the segment was a "false narrative."

The internal memo was first tweeted by AirlineGeeks.com, and Allegiant later confirmed to CBS News that it had been sent to employees. "Know we are prepared to fight back against ’60 Minutes,"’ the memo reads. 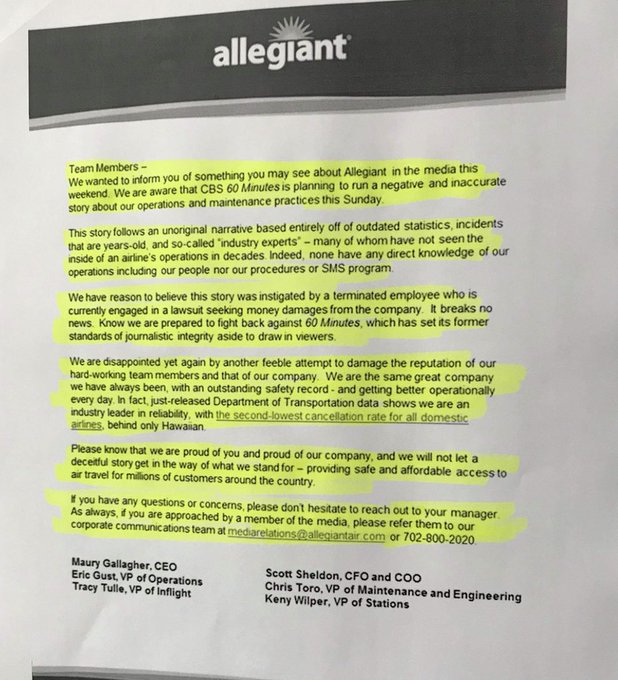 "60 Minutes" correspondent Steve Kroft said in an "Overtime" segment that "60 Minutes" got "no cooperation" from either Allegiant or the FAA in the beginning of reporting the story.

In the memo, Allegiant blamed the report on a "terminated employee" who is "currently engaged in a lawsuit seeking money damages against the company."

It’s unclear who employee Allegiant is referring to. The "60 Minutes" piece details an incident involving Captain Jason Kinzer, who was fired in 2015 six weeks after turning around shortly after takeoff due to smoke in the cabin. Loretta Alkalay, who spent 30 years as an FAA lawyer, said she has "never ever heard of an airline firing a pilot for an emergency evacuation."

But Kinzer’s story is just one of the incidents detailed in the report. "60 Minutes" quoted air safety experts and passengers, and public documents show an alarming number of aborted takeoffs, cases of cabin pressure loss, emergency descents, and unscheduled landings.

On its social media feed, Allegiant answered those who tweeted they were worried by asking them to send a private message. In response to one comment, Allegiant wrote "we’d like to share our concerns about the story with you." It’s unclear what Allegiant means by "concerns."

Allegiant posted a new statement after the segment aired, taking a similar tone to the memo. "Incidents referenced are years old, and took place before our most recent, comprehensive FAA audit. The story breaks no news," the statement reads.

The "60 Minutes" story is not about old incidents: Between Jan. 1, 2016 and the end of Oct. 2017, "60 Minutes" found more than 100 serious mechanical incidents, including mid-air engine failures, smoke and fumes in the cabin, rapid descents, flight control malfunctions, hydraulic leaks and aborted takeoffs.

The story highlights how Allegiant’s problems come from the confluence of its aggressive business model and a safety culture aviation experts find to be lagging.

John Goglia, who has more than 40 years of experience in the aviation industry, including nine as a presidential appointee to the National Transportation Safety Board, told "60 Minutes" he has "encouraged my family, my friends and myself not to fly on Allegiant."

Users on social media were shocked by the report. Kroft himself said in the "Overtime" segment that he is "flabbergasted" that not more people know about Allegiant’s safety record.

"It is unfortunate and disappointing that CBS 60 Minutes has chosen to air a false narrative about Allegiant and the FAA.  Not only do we expect our team members to adhere to all company procedures and policies—including safety procedures—but many positions are subject to statutory and regulatory obligations.  The violation of those obligations would trigger not only punitive action from Allegiant, but could also result in enforcement action from regulatory agencies, loss of a certification, and even criminal charges.  To suggest that Allegiant would engage in the practice of asking team members to violate company and regulatory obligations is offensive and defamatory.

"CBS produced a one-sided narrative by cherry-picking interviews and ignoring publicly-available facts.  For example, the show’s star interviewee, John Goglia, is not an un-biased commentator; he is a paid expert working for a former Allegiant pilot who has sued Allegiant.  That pilot, Jason Kinzer, claims that he was wrongfully terminated after an evacuation. In fact, Kinzer was terminated because he unnecessarily evacuated a plane "at great risk to the crew and passengers" even though there "was no smoke, fire, or an aircraft malfunction," and, during a post-flight investigation, he refused to "acknowledge his mistakes" or "demonstrate[] that he was capable of learning and growing from the event going forward."  Surprisingly, the 60 Minutes presentation of Mr. Kinzer’s case omits this publicly-available side of the story.

"The FAA exercises rigorous oversight of Allegiant, as they do all airlines operating in the United States.  Allegiant complies with all FAA requirements and participates in numerous voluntary safety programs to ensure we operate to the highest standards. Additionally, we expect our team members to follow all company policies and practice strict adherence to FAA regulations and guidelines.  Several anonymous, non-disciplinary reporting systems are available through Allegiant as well as through the FAA for team members to report safety concerns.  Notably, none of the concerns allegedly expressed by Allegiant team members during the 60 Minutes episode were found to have been reported through any of these appropriate channels.

"Allegiant’s team members safely operate thousands of flights each week, which will transport more than 14 million passengers this year.  We have safely carried nearly 90 million passengers since beginning operations in 2001. Our workforce is made up of more than 4,000 dedicated and hard-working people who wake up every day thinking about how to move our customers safely from one place to another.