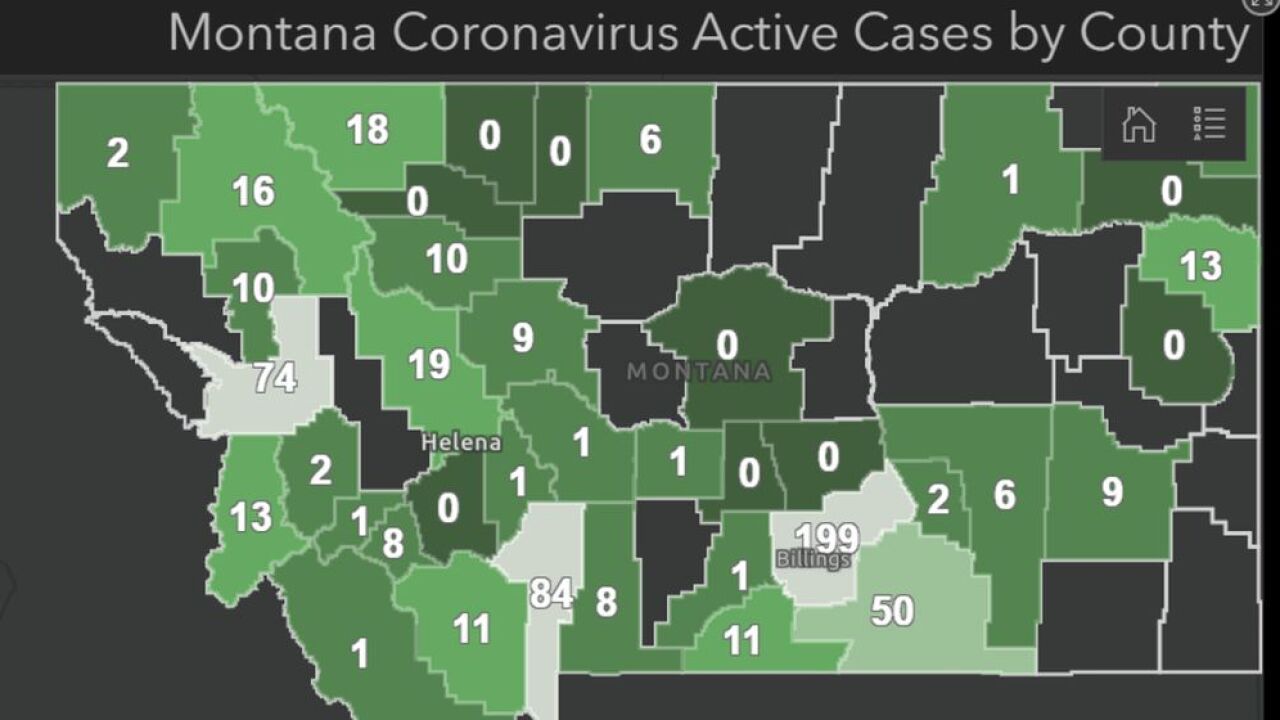 GREAT FALLS — Health officials reported 80 new COVID-19 cases across Montana on Tuesday morning, according to the Montana Response COVID-19 tracking map. It is the largest one-day increase in Montana since the pandemic began.

The majority of the new cases - 55 - were reported in Yellowstone County, where Canyon Creek Memory Care Community announced early Tuesday that an outbreak of the virus had infected dozens of residents and staff. Two residents who tested positive have been admitted to the hospital. The facility at 1785 Majestic Lane is under quarantine, and residents and family have been notified of the situation.

Note that official numbers reported by the state occasionally differ from those reported by county public health departments due to periodic lag times in reporting data to the state. The numbers below are from the Montana Department of Public Health & Human Services:

TOTAL CASES & RECOVERIES: There have now been 1,327 cumulative cases statewide, and 716 people have recovered from the virus.

HOSPITALIZATIONS: There have been 117 hospitalizations due to COVID-19 since the pandemic began; there are currently 22 patients hospitalized.

ACTIVE CASES: The state reports there are currently 588 active COVID-19 cases in Montana, up from 466 on Saturday.

TESTING: The number of tests increased by 2,401 over the previous 24-hour reporting period, for a new cumulative state-wide total of 105,327.

DEATHS: Big Horn County reported on Thursday, July 2nd, that a woman in her 60s passed away in a hospital due to COVID-19; the cumulative number of deaths in Montana is now 23. There have been six deaths in Toole County, four in Yellowstone County, four in Big Horn County, two in Cascade County, and two in Flathead County. The other deaths have been reported in Gallatin, Lincoln, Madison, and Missoula counties. Prior to Thursday, the most recent death was reported on June 26th.

CASCADE COUNTY: According to the state data, Cascade County currently has nine active cases, and a cumulative total of 36. Of those 36 cases, 25 patients have recovered, and two have died. Free drive-through testing is available in Great Falls from Alluvion Health in the parking lot of the former Westgate Mall, located at 3rd Street NW. Click here for dates and times. As with previous reporting of COVID-19 cases, the lack of specific information about cases has some people upset, but the disclosure of patient information is regulated at both the federal and the state level. Click here to read more about privacy regulations and what can/can't be released.

TETON COUNTY: The Teton County Health Department on Saturday said that people who attended the MORP (prom) at the Choteau Country Club on June 27th may have been exposed to a confirmed case of COVID-19. Click here for more information. The mayor of Choteau, Chris Hindoien, addressed the issue in a Facebook post on Sunday; click here to read it.