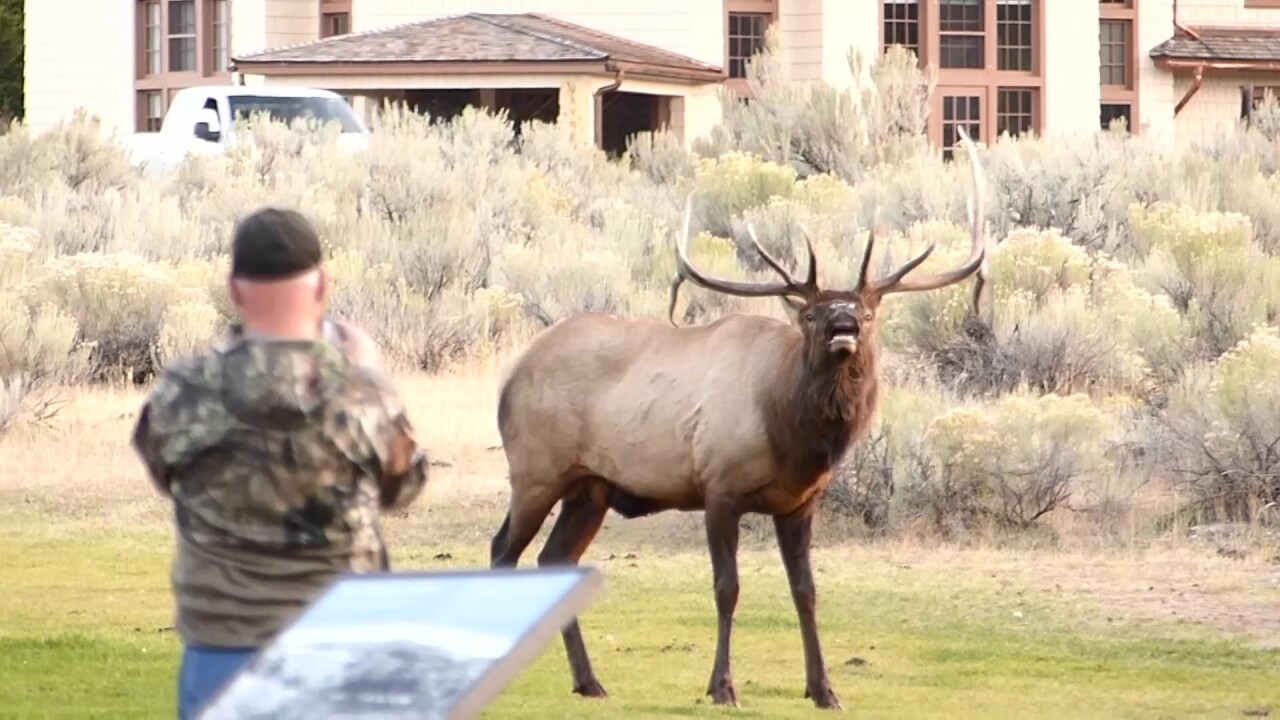 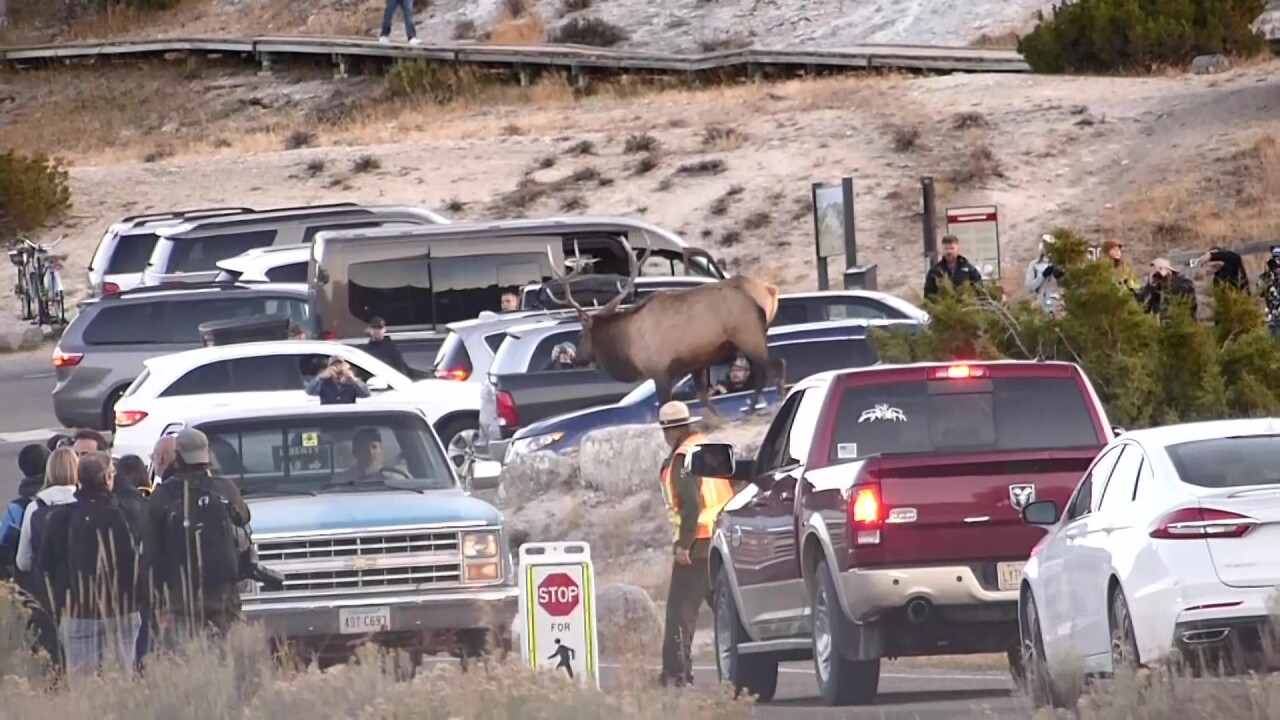 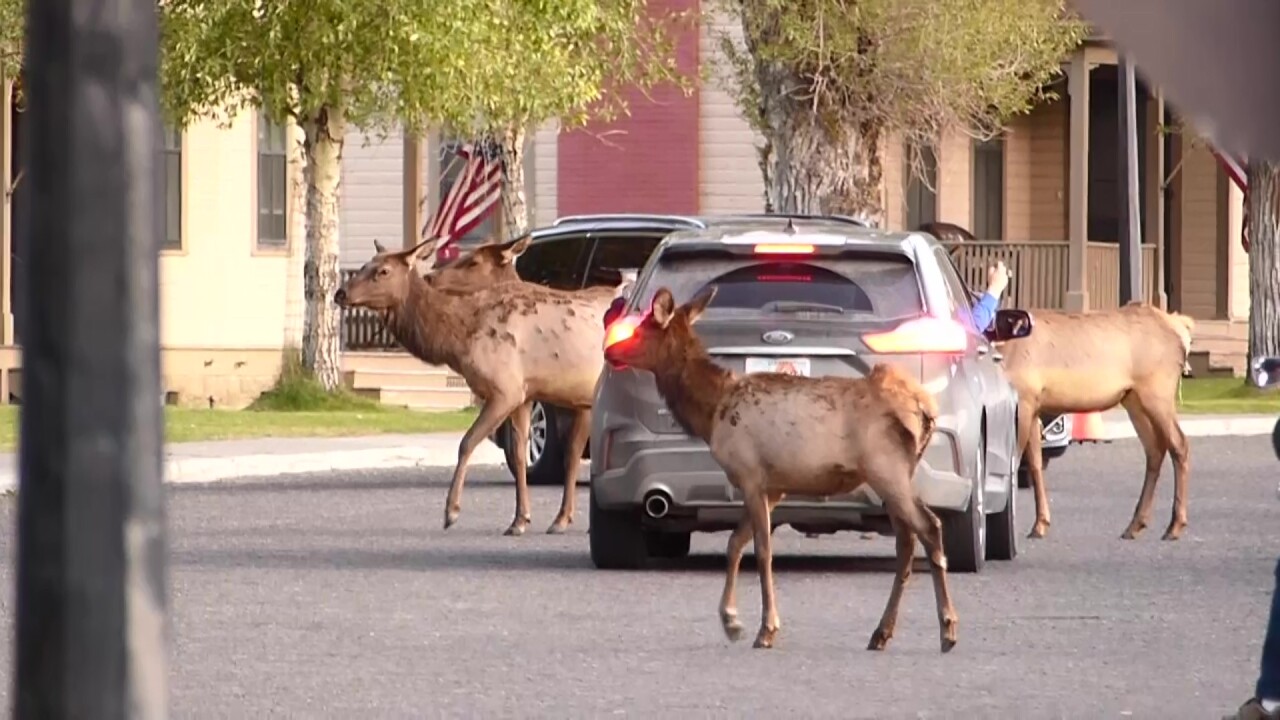 MAMMOTH, WYOMING — “By late afternoon it can get pretty interesting around here,” a National Park Service employee in Mammoth confided in late September.

Those words were echoed in the shouts of park rangers just a few hours later as, “Take cover!” rang out across the former parade grounds of the onetime fort and now administrative center for the park.

Those big bulls are collecting and protecting their harems right now. The bulls collect cows, or female elk, into tight groups which they jealously guard by marking their territory with urine and scent, by tearing branches off trees and scraping the bark off trees with their antlers and by pawing the ground. The bulls shout their presence with a shrill scream whistled through their teeth, known as bugling.

The bulls also fight at this time of year. They will square off in antler battles with other bulls, that can sometimes result in injury. But their wrath is taken out on more that just other elk. They are highly aggressive at this time of year and have been known to charge and injure people, vehicles and other inanimate objects in the park during the rutting season.

"The elk rut is dangerous to visitors who are not aware of elk behavior,” said Warthin.

That’s a problem because elk like to hang out in one of the most popular parts of the park, the Mammoth visitor complex. It includes a visitor center, the main park administrative offices, a hotel, restaurant, gift and snack shop, a gas station, post office, medical clinic, law enforcement station, Federal Courthouse and living quarters for park and service employee staff. It’s a busy place.

Warthin says people need to keep an eye on what elk are doing. “It’s erratic behavior that visitors should be aware of,” she said.

On a typical night in Mammoth at this time of year, crowds of people are trying to get close to the big bull elk. Rangers are darting all around, warning people back, trying to head off problems. The elk are all worked up during the height of their mating season, staking out territory, like one bull seen tearing off branches in a tree just a few feet from a parked tour bus.

It seems like chaos as bull elk walk or sometimes run between onlookers and vehicles. Some park visitors are not even aware of what is happening, walking out of a building into the confusion and shouted warnings. Vehicles arrive from other parts of the park with drivers confounded by the congestion and groups of camera laden onlookers. A man with a British accent asks how close you can get?

It's a good question. The park says stay at least 75 feet away from elk, but this time of year, when a big bull may take off at a dead run toward you at any time, that may not be nearly enough.

As Warthin says, “Elk are dangerous this time of year.”

Click here to learn more about elk in Yellowstone National Park, including this overview:

Yellowstone provides summer range for an estimated 10,000–20,000 elk (Cervus canadensis) from six to seven herds, most of which winter at lower elevations outside the park. These herds provide visitor enjoyment as well as revenue to local economies through hunting outside the park. As Yellowstone’s most abundant ungulate, elk comprise approximately 85% of winter wolf kills and are an important food for bears, mountain lions, and at least 12 scavenger species, including bald eagles and coyotes. Competition with elk can influence the diet, habitat selection, and demography of bighorn sheep, bison, moose, mule deer, and pronghorn. Elk browsing and nitrogen deposition can affect vegetative production, soil fertility, and plant diversity. Thus, changes in elk abundance over space and time can alter plant and animal communities in Yellowstone.