Health officials: COVID-19 spike in Montana is due to more personal contacts and testing 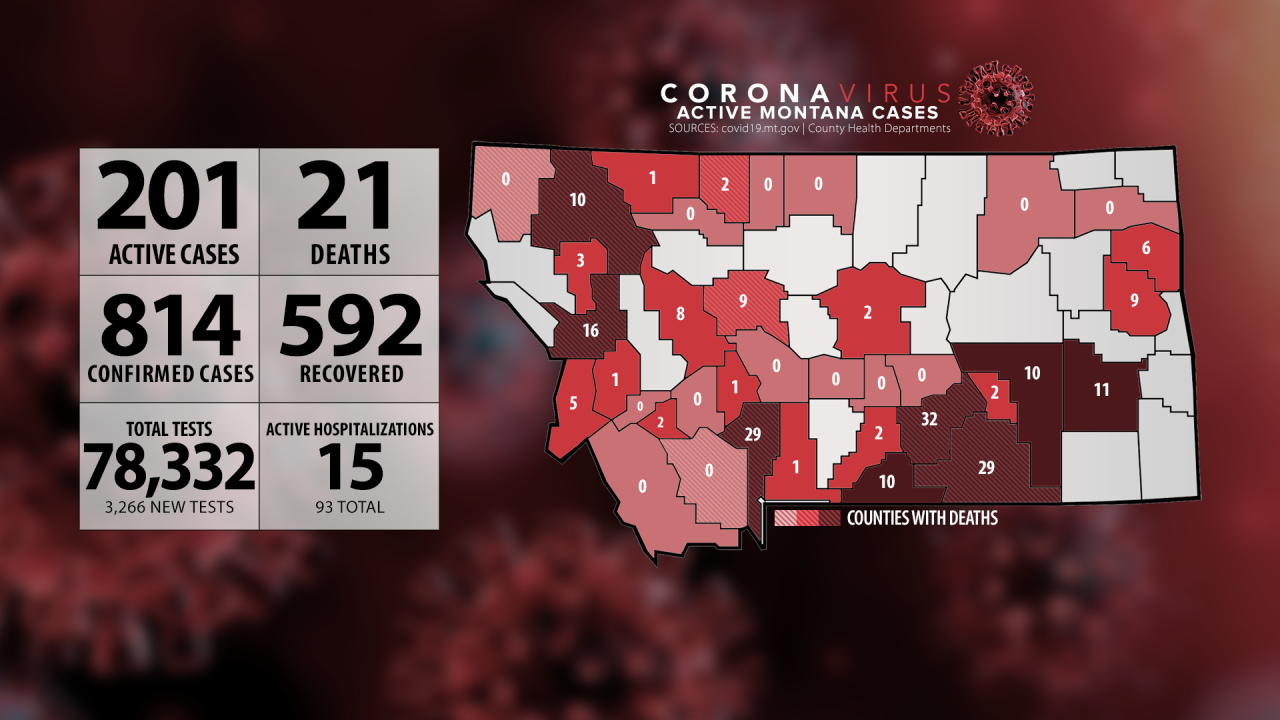 They also said the increase is not entirely unexpected – but that Montanans have the power to tamp it down, by following social-distancing guidelines and taking other precautions, such as wearing masks when interacting with others

“Yes, there are some inconveniences, and yes, we are all going to have to deal with that,” said Greg Holzman, the state medical director. “But those are so minor, when we consider the alternatives.

On Thursday, the state reported 37 new cases – the largest one-day count in Montana since the COVID-19 pandemic began in March.

That spike pushed the total for the previous week to 148 cases. The only higher weekly total has been the last week of March, which saw 156 cases.

What’s behind big jump in Covid-19 cases in Montana?

Gov. Steve Bullock shut down most of the state economy and issued a stay-at-home order that week, and new cases fell to a trickle through the latter half of April and May. But they’ve been on a mostly uphill climb since early this month, when “Phase 2” of reopening plans began.

New cases have been reported in 24 counties the past week, including some in counties that previously had no cases at all.

Leading the way in new cases last week are Gallatin County with 35, Yellowstone with 31 and Big Horn with 29.

“If we don’t do things right in Montana, this virus can quickly get out of hand,” Bullock told reporters on Wednesday, noting that the state still has one of the lowest infection rates in the nation. “Let’s continue to be that shining example for the rest of the nation, as we did throughout our initial response to the virus.”

Health officials said more testing and contact tracing have revealed several trends in the spread of the disease.

Jim Murphy, head of the state Bureau of Communicable Disease Control and Prevention, said people are having more contact with each other when they go back to work and in group settings, leading to more opportunities to catch the disease from others.

Stacey Anderson, the lead epidemiologist for the bureau, also said that one case of spreading the disease came from workers who had traveled to a worksite in a van and weren’t wearing masks.

“This really stresses the fact that when we talk about being in places where you can’t social distance, it would be a great idea to wear a mask,” she said.

In Miles City, which saw a big jump in cases the past two weeks, the outbreak was traced to several group gatherings – and, people in those groups spread the disease to four other counties, Anderson said.

“So, if you liken it to a wildfire, you have a spark going into another county and setting off another cluster of cases,” she said.

Murphy told of another outbreak that originated at a Missoula health-care workplace, and then spread to Helena and perhaps other locales, which are still being traced.

“It shows how contagious this virus is, and how even in a workplace setting, not social distancing, or not using PPE all the time can lead to a pretty quick outbreak,” he said.

A big surge of cases on the Crow Indian Reservation in Big Horn County occurred after some cases showed up and many other people were tested, even though they didn’t show symptoms.

Anderson said they were carrying and spreading the disease, but didn’t know they had it, and that some also spread it to Billings when they went to medical appointments.

Bullock and others urged people and businesses to take precautions and follow the advice of local health departments that are tracing the disease.

“If you see individuals who aren’t following those plans, don’t scold them,” said Holzman. “We’re all trying to learn this together. …