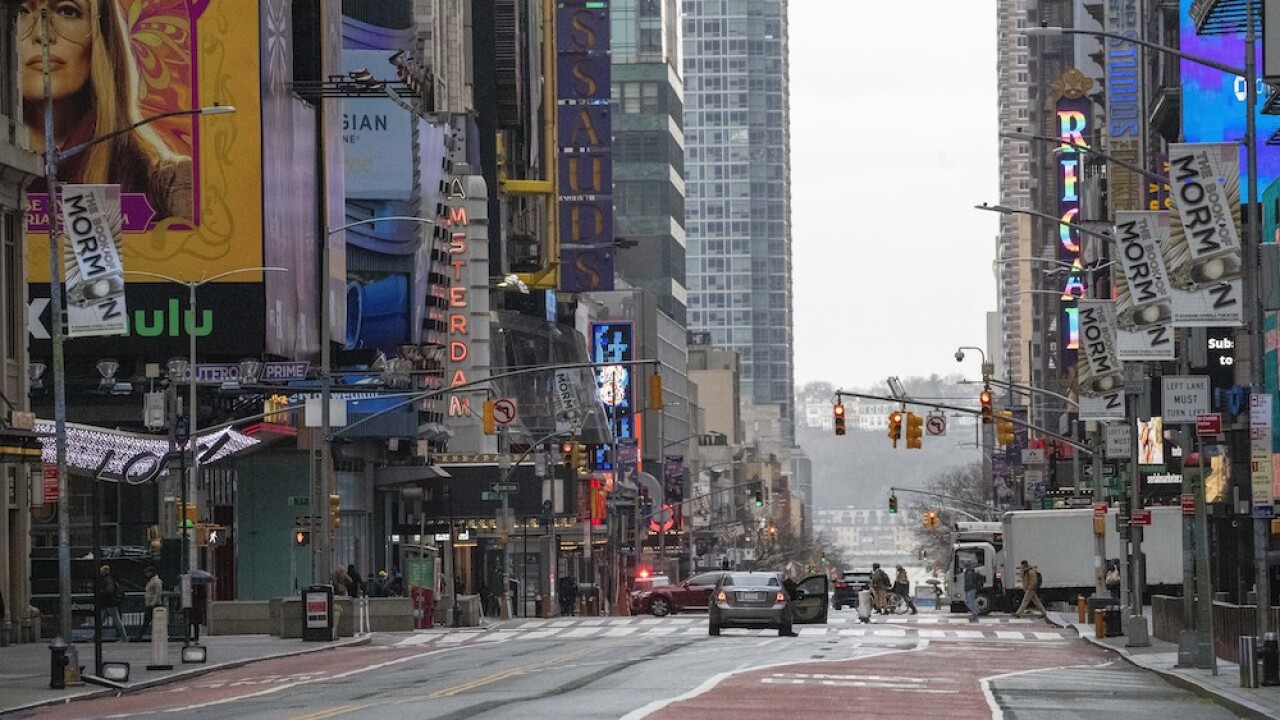 Copyright 2020 The Associated Press. All rights reserved.
Mary Altaffer/AP
Light traffic is seen on 42nd St. in New York's Times Square, Wednesday, March 25, 2020. Hospitalizations from COVID-19 were rising faster than expected in New York as residents and leaders prepared for a peak in cases that is expected to still be weeks away. Temporary hospitals, and even a morgue in Manhattan, are being setup. The new coronavirus causes mild or moderate symptoms for most people, but for some, especially older adults and people with existing health problems, it can cause more severe illness or death. (AP Photo/Mary Altaffer)

Deaths linked to the novel coronavirus have surpassed 1,000 in the United States as cases in the country near 70,000, according to a database kept by Johns Hopkins.

About 15,000 people in the U.S. were confirmed to have the virus as of Thursday morning.

Given the exponential rise in cases, the U.S.'s population and the its still-increasing testing capacity, the U.S. will likely surpass Italy (74,386) and China (81,782) for the most confirmed cases of the disease in the coming days — both of whom have begun to see new cases slow because the virus spread there first.

You will find more infographics at Statista

Researchers believe the true number of those infected is likely higher, as the United States is still struggling to test all those that believe they are sick. While Johns Hopkins says a total of 619 across the country are confirmed to have recovered from the disease, that number is likely much, much higher, given that many people who contract the virus only experience mild symptoms and are never tested for the disease.

About 200 people across the country died of the disease on Wednesday — including a stunning 88 people in New York City alone. The death toll in New York rose from 192 early Wednesday morning to 280 on Thursday morning.

Thirteen of those deaths occurred at a single hospital in Queens on Wednesday.

New York City has become a hotspot for the virus, as the 20,000 cases in the city currently reflect nearly 30 percent of confirmed cases of COVID-19 across the country.

The exponential rise in coronavirus cases has overwhelmed the city's medical system. Healthcare workers treating COVID-19 patients said they are struggling to get tested for the disease and say they're running desperately short of personal protection equipment.

Elsewhere in the U.S., King County in Washington state on Thursday became the second county to record 100 deaths linked to COVID-19. The county, which encompasses Seattle, was where the first confirmed case of the virus occurred in the U.S. About 30 of the deaths in the county can be traced to a single nursing home.