Toys For Tots in Great Falls needs help with donations

Getting ready to wrap up its campaign for the 2019 season 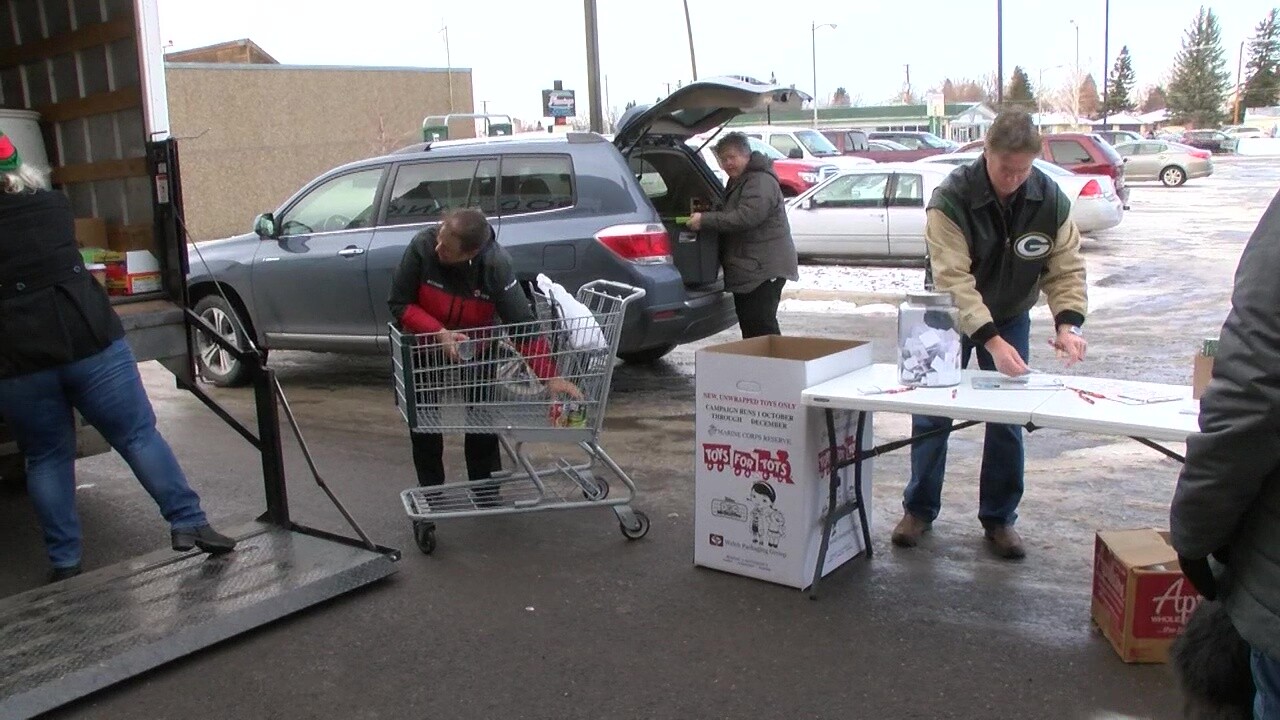 GREAT FALLS — On Tuesday, KRTV participated in the annual "Day Of Giving" at Super 1 Foods.

There were many generous donations from scores of people throughout the day that benefited the Great Falls Community Food Bank, the Salvation Army, and Toys For Tots of North Central Montana.

Toys For Tots is getting ready to wrap up its campaign for the 2019 season - but still need donations for their final round of shopping that will take place next week.

They had their annual auction last weekend and organizers say they raised more than $38,000, even with 100 fewer people attending than last year.

Toys For Tots coordinator Marylou Brewster said, “What we always are short on is for the older kids. You know, the 13, 15, 16, 17-year-old kids, they’re hard to buy for.”

You can still enter to win a pair of round-trip tickets from Alaska Airlines to any destination they offer by donating. The winner will be drawn next week.

Toys For Tots will still be accepting donations up until the end of the campaign but any donations received after that will be added to the start of their 2020 campaign.

If you are interested in donating (or applying for toys) you can find more details on their website, including a list of all Toys For Tots drop off locations.

(DECEMBER 2, 2019) Toys Tor Tots in Great Falls is gearing up for the holiday season, and says the need for toys is even higher this year than it has been in the past.

Toys for Tots of North Central Montana has been operating since 1947; every year they have exceeded the amount of kids they have been able to help during the holidays. And this year will be no exception as they are now considered the only "large" campaign in Montana.

Kids in Great Falls and the surrounding counties will receive new, unused gifts that they otherwise might not get, such as board games, puzzles, stuffed animals, or electronics.

Last year they were able to distribute just nearly 10,000 toys to children in and around Great Falls.

Coordinator Mary-Lou Brewster says that is one reason she keeps coming back to do this every year: “We love Christmas, we love kids, what better way to repay our community."

She says they currently have about 3,000 toys and need closer to 12,000. One of the categories that typically gets overlooked is boys and girls between ages 10 and 17.

Their biggest fundraiser is their live and silent auction which takes place on Saturday, December 7th, at the Elks Lodge. Doors open at 5:30 and the prime rib dinner catered by Good Eats will be served starting at 6:30; there will be a live and silent auction as well as baked goods for sale. Tickets are $25 per person and can be bought at either Albertsons location or by calling 406-452-8550 Sponsor tables are also available for $500 and seats 8 people. Tickets may be available at the door, but this event has sold out in the past - organizers say it is best to get your tickets early.

If you are interested in donating or applying for toys you can find more details on their website , including a list of all Toys For Tots drop off locations .