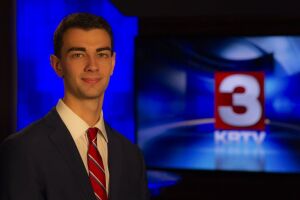 Matt joined the KRTV team in August 2019. He produces and anchors the weekend newscasts, and reports during the week.
He graduated from Elon University in North Carolina in May 2019 and came to Great Falls for his first job out of college.
His love for sports is what originally drew him to broadcast journalism, and he also helps the MTN Sports team on occasion.
Matt is originally from Chapel Hill, North Carolina, and is always looking for tips on how to survive the Montana winters. During his time in college he interned with the Leesburg Lightning of the Florida Collegiate Summer League and the Burlington Royals, the Rookie-level affiliate of the Kansas City Royals, as a broadcaster and a writer.
At Elon, he was the host of a sports debate show called One on One Sports for two years, and he served as the Sports Director for the University’s radio station during his senior year. He also broadcasted games for Elon’s basketball, baseball, softball, and soccer teams through the school’s student media organization Elon Sports Vision.
You can stay in touch with Matt and follow his adventures in Big Sky Country on Twitter.