(GREAT FALLS) Last week, Bishop Anthony Milone died at the age of 85 in his hometown of Omaha, Nebraska.

He was the sixth bishop of the Diocese of Great Falls-Billings.  During his more than 18 years of leading Catholics in eastern Montana, he oversaw many notable accomplishments. One of his most memorable achievements was helping a group of nuns call Montana home.

“He was so important to our community that he brought us out here to Montana,” said Sister Jane Sorenson, Abbess of the Poor Clares Monastery.  “He believed that the church wasn’t complete unless there was a group of women or people praying for the Diocese, so he has supported us through the years.” 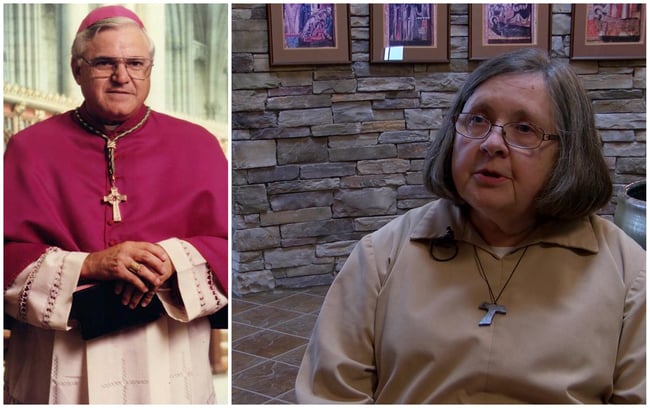 The Poor Clares mission is prayer. Their history in Montana is due in large part to the efforts of Bishop Milone, who 20 years ago wrote to the leader of the Franciscan order inviting them to make a foundation in the diocese of Great Falls-Billings.

“Even though with struggles, with ups and downs that everyone experience in every group we knew, it was very clear to us that God wanted us here and that we were coming in the right direction,” said Sister Jane.  “Its been very much of a gift to make this journey.  We felt like pilgrims!”

In 1999, Sister Jane and three other sisters took up residence in Great Falls and in 2003, ground was broken for the monastery on the city’s Southside. Construction began on living quarters in the fall of 2004 and was completed just over a year later.  Shortly after that, work began on a chapel.

In May of 2007, the chapel was dedicated.  Sister jane said she wasn’t surprised that Bishop Milone, who had since retired, returned for the ceremony.

“He believed so much in our life and he was very happy to come and be part of the dedication of the chapel it was really important to him,” said Sister Jane.

Sister Jane said Bishop Milone’s compassion, his devotion to his faith, and his humility are what made the Poor Clares Monastery in Montana a reality.

“Even when he brought us over to the house when we arrived, we asked for a blessing and he asked one of us to say the blessing,” said Sister Jane.

Diocesan officials say the monastery was one of two signature marks of Bishop Milone’s service in Great Falls.  The other being his development of a comprehensive strategic plan for the diocese.

A funeral was held Thursday, May 24 for Bishop Milone in Omaha.