(LIVINGSTON) A nesting family of Great Horned Owls made May an exciting month for middle-schoolers at Sleeping Giant in Livingston, but that all ended on a somber note on Wednesday, when staff discovered that the mother of the two baby owls had been killed.

"We’ve had kids and staff in tears today, and so at least they know that the owlets are safe," said Laurie Dust, co-principal at Sleeping Giant Middle School.

According to the Livingston Fire Department, a witness reported that they had seen someone from a distance throwing rocks at the mother owl on Tuesday night, but officials weren’t able to make an identification on the individual.

Scared and without a mother, the two baby owlets huddled together near the school on Wednesday morning, where they were later taken in by rescuers.

But before they lost their mother, this family of owls made quite the impact on this Livingston school. 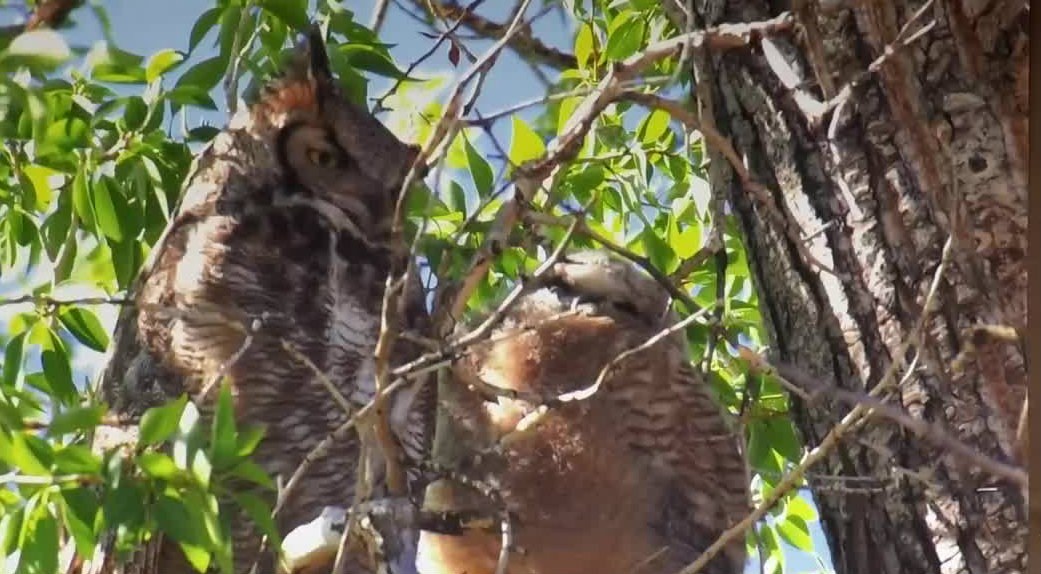 Seventh-grade life science teacher David Pettit discovered the owls and their nest a little more than a month ago, and his class has followed them ever since.

"There was still a little bit of snow on the ground, still cold in the morning with frost and what have you,” Pettit said. “We had just found some pellets in the Yellowstone River and they were old, and we were just coming back and happened to look in the grass and we looked up, and there the mom was,” he said.

The two owlets and their mother were nesting in a tree right outside of Pettit’s classroom, providing students with a pretty special learning opportunity.

"It was like a hands-on lab, so I didn’t have to go out and create my own,” Pettit said. “The owls were there and nature just was doing it, so it was kind of a good education so they could actually see what they were talking about in nature, how it works,” he said.

And as for the two owlets, don’t worry. They’re in good hands with rehabbers at the Montana Raptor society in Bozeman, where they will be looked after until they can be re-homed in another nest.

But staff and students at Sleeping Giant will continue to follow the owlets on their journey.

“It is important to our staff, and to our kids, and we’re all totally engaged in their future,” Dust said.

Livingston Fire is offering a $200 reward for anyone who has information on the death of the mother owl, and the department said it’s received more than $1,000 in additional funding to support the cause.

You can see how to donate here.