(GREAT FALLS) Effective immediately, Rising Sun Campground along the Going-to-the-Sun Road on the east side of the park will temporarily be limited to hard-sided camping. This means that tents and soft-sided campers will not be permitted until further notice. Camper vehicles such as VW buses and pickup trucks with small canvas pop-ups are allowed as long as the canvas is not exposed.

A press release from Glacier National Park says that on Friday afternoon (August 24th), an animal – believed to be a bear – ripped into the side of a tent and pulled out bedding and pillows.

Wildlife staff evaluated the campsite, obtained hair samples believed to be from a bear, and found an adult-sized scat pile in the area where the pillows were found. There were no known attractants or food rewards in the tent.

Park staff have seen transient bear activity in the Rising Sun Campground for about the past two weeks. Berries are abundant, and the cliffs above the campground are a known wildlife corridor.

Because there were no witnesses to this incident, park staff have not yet been able to determine which bear or bears are responsible, and therefore cannot make a determination about whether the actions were due to habituation, food-conditioning, or curiosity.

The park has placed a decoy tent and game camera in the campground area to monitor further activity. No attractants will be placed in the decoy tent.

Visitors and residents are urged to learn more about the importance of food storage while living and recreating in bear country for bear and human safety. Once bears have successfully obtained unnatural food from people or become accustomed to foraging in developed areas, it is very difficult to change their behavior to return to wild areas and natural food sources. Once bears receive a human food reward, they often become a safety hazard, becoming increasingly aggressive seeking out and obtaining subsequent food rewards.

A similar incident happened nearly two months ago. On June 29th, a small grizzly bear weighing about 150 pounds entered the Many Glacier Campground. It crossed a stream, entered a campsite, and compelled two campers to move away from a picnic table where they were cleaning two recently-caught trout.

One of the campers sprayed the bear with bear spray from a distance of 15 feet. The spray was unsuccessful in deterring the bear’s approach, and it proceeded to climb on top of the picnic table and consume the fish. It also sniffed, pawed, and bit two nearby backpacks.

Park rangers responded and used hazing techniques to encourage the bear to move out of the campground. Prior to its departure, it dug into two fire pits, sniffed picnic tables, a tent, and an RV with visitors inside. The park has not captured the grizzly bear involved in the incident, despite trapping efforts. 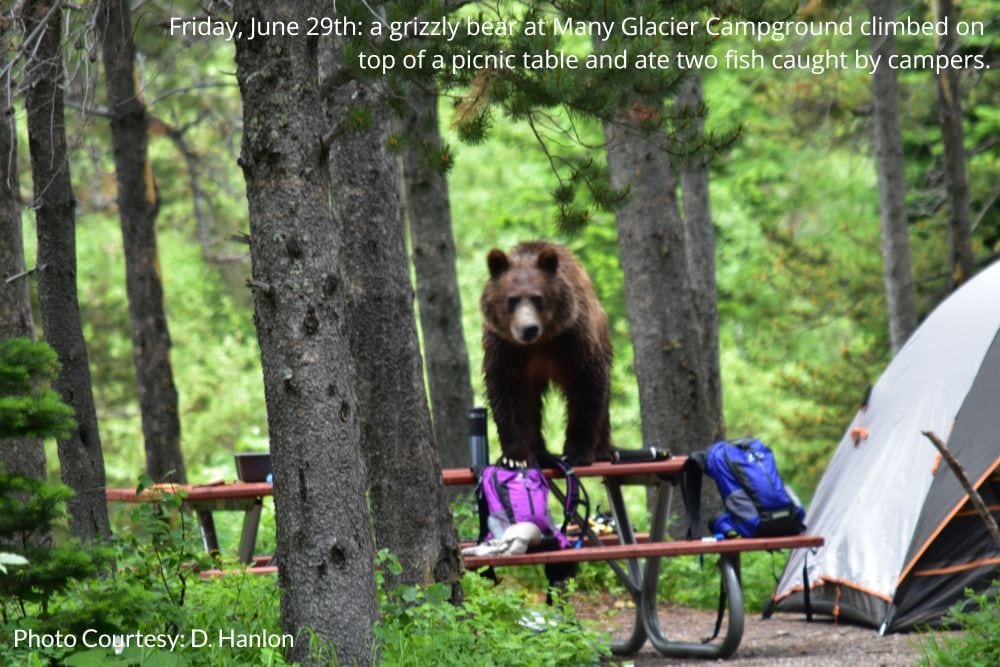