Investigators: videos show boy being tortured by members of his family before his death 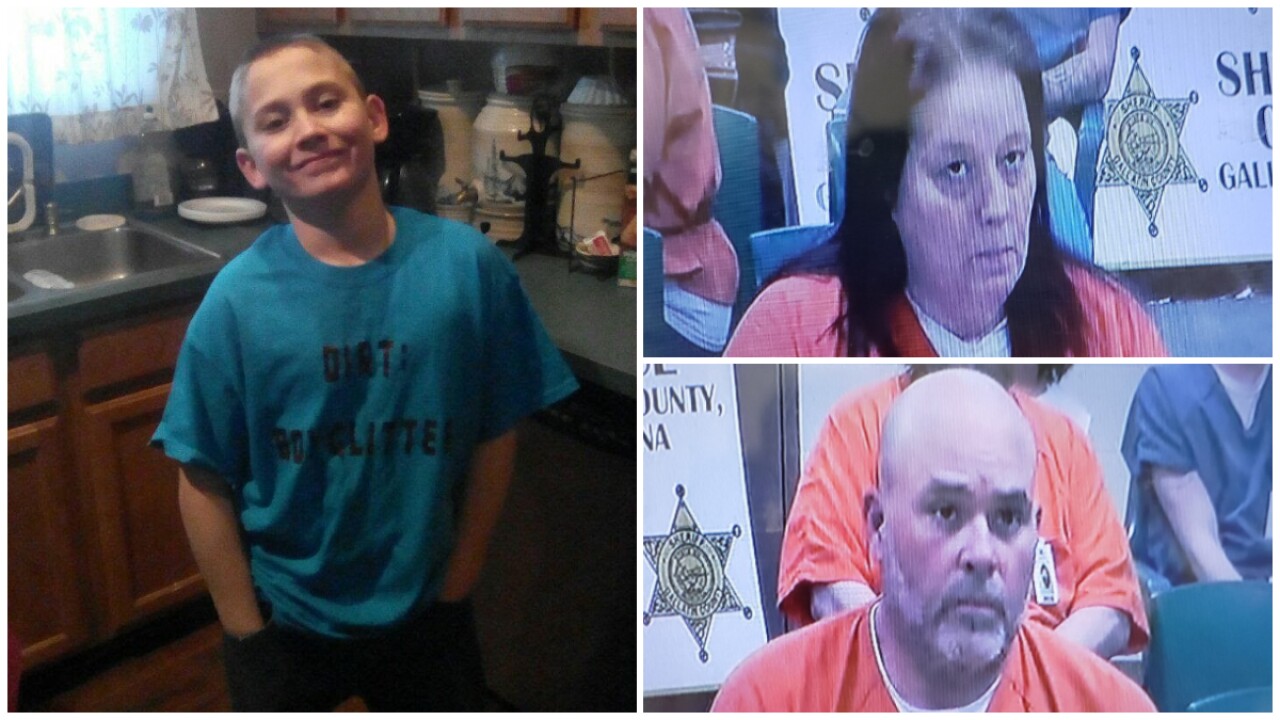 BOZEMAN — Two of the three people arrested for the death of a 12-year-old boy outside West Yellowstone were seen in Gallatin County Justice Court on Thursday.

Investigators say they found videos of James Alex Hurley, 12, being tortured by members of his extended family before his death.

The Gallatin County Sheriff’s Office arrested James Sasser Jr., Patricia Batts, and a juvenile boy, James Sasser III, 14 (uncle of the victim) for the offense of Deliberate Homicide. The charges are in reference to the death of Hurley outside of West Yellowstone, on or about February 3, 2020.

According to charging documents, on February 3, a Gallatin County Sheriff’s deputy was dispatched to a home on Buffalo Drive in West Yellowstone for the unattended death of a 12-year-old child. The deputy believed circumstances surrounding the death were suspicious and he requested assistance from the Detective Division after he saw that the boy had multiple wounds and contusions all over his body.

Further investigation found that Hurley was living with his grandparents, his 18-year-old aunt, and his 6 and 14-year-old uncles. Hurley’s grandmother, Patricia Batts, told investigators that the boy had been living with them for two years after being sent to Montana by his mother to live with his father while his mother continued to live in Texas. The boy’s father died approximately two years prior and that was the reason the boy was living with them.

Batts said she had three biological children with James Sasser Jr., including Madison Sasser, 18, and James Sasser, III, 14 and another boy 6.

When the victim’s mother was contacted by a detective, she said she had made numerous attempts to contact the boy by telephone, but was systematically blocked by Batts.

Batts reportedly told investigators the boy’s behavior had become “increasingly problematic” after the boy’s dad passed away, including drinking alcohol and stealing items from the family and stores.

The grandmother, Sasser, and the older uncle all stated the boy complained of hearing voices and had been observed self-harming himself multiple times, causing injuries to himself. The trio also stated the boy was suicidal.

The 14-year-old uncle stated that sometime during the last week of January, the victim ran into the corner of the entertainment center, causing an injury to his head and having a gash that bled profusely. Batts, Sasser, and the uncle stated that due to the boy’s “erratic” behavior, they had to constantly watch his every move, including someone staying up at night to make sure he was not going to harm himself or someone else.

The trio said that on or about January 27, the 14-year-old uncle woke up during the night and saw Hurley standing over Batts with a knife, so he tackled the boy and punched him several times on his body and in the head. The detective noted in court documents that the boy was approximately 103 lbs and 5’3, while the 14-year-old uncle was approximately 300 lbs and 6’ tall.

The detective also was not able to locate any record of the family reporting the claimed behavior to law enforcement or the family attempting to get medical or psychiatric help for Hurley.

Batts, Sasser Jr., Madison Sasser, and Sasser III all reportedly told detectives there were numerous instances of physical violence by the uncle against the victim. Sasser III also stated he made a paddle out of wood with a blue-taped handle and would hit the boy multiple times with it, mostly on the buttocks, but sometimes other places. A photo of the paddle was located on the grandmother’s phone during a later search.

Hurley’s body had injuries to his buttocks consistent with what could be inflicted by a paddle, detectives observed. They also observed multiple other injuries in multiple locations all over his body with severe bruising, that they believed were not consistent with self-inflicted injuries.

On February 4, Hurley’s body was taken to Missoula for an autopsy at the Montana State Crime Lab. The examiner preliminary told a detective that Hurley died from blunt force trauma to the back of the head.

During a search of Batts’ house, detectives observed an indentation in the wall consistent with a head being hit into the wall with a trace amount of blood near the indentation. Later, during a more thorough search, detectives located forensic evidence that very large amounts of blood had been previously cleaned from the floor and various other surfaces. During interviews, each member of the family denied a large amount of blood ever existing within the house.

Sasser III, the 14-year-old uncle, was interviewed by detectives and said multiple altercations took place between him and the boy, the last one occurring on Saturday, February 1 at around mid-day. He denied hitting the boy in the head with the paddle and that they had a fight on January 27 that was even worse.

Madison Sasser told a detective that she watched the Super Bowl on February 2 with friends in West Yellowstone and everyone was asleep when she arrived home that evening. She reported that Hurley was asleep on the floor of the living room and the grandmother was asleep on the couch. She told the detective that, to her knowledge, no altercations occurred after she arrived home, but also said she had texted friends that she believed her brother had killed Hurley.

Sasser Jr. reported that he had been sleeping during the Super Bowl, but stated that his son and Hurley had gotten into an altercation. He reported that he awoke on the morning of Monday, February 3, and was on his way to work when he learned from Batts of the boy’s death.

Batts told detectives she was also sleeping during parts of the Super Bowl but awoke to the uncle and Hurley having an altercation, with the 14-year-old striking the boy with the paddle. She denied that Hurley was hit in the head with the paddle. The grandmother minimized the fight during the Super Bowl, saying the pair had a significant fight on January 27, where the 14-year-old had beat Hurley, stating the fight was a “bad fight” and it was a “blood bath.”

She reported that the boy slept on the floor of the living room the night of February 2 and was mumbling and “moaning” throughout the night. She reported finding Hurley’s body on the morning of February 3, and that he was deceased. She reportedly called 911 upon finding the body.

Cell phones belonging to Batts, Sasser Jr. Madison Sasser and the 14-year-old uncle were seized by detectives. In reviewing the various phones, detectives found videos of what appeared to be the family torturing Hurley, including:

On January 17, Sasser III texted Sasser Jr. at 8:07 a.m. “I’m gonna end up killing him today.” On January 27, the 14-year-old searched for “what was the longest coma?” On February 2, he searched for “what are the symptoms of brain injury?” “Concussion symptoms” and “how do you tell if someone has a concussion?”

During various interviews, detectives determined Hurley had been taken out of school in September 2019. Court documents state it appears that very few people have had contact with the boy in the last several months outside the family. Batts stated she and Sasser Jr. didn’t take Hurley to a doctor to seek medical help for any of his injuries.

Bail for James Sasser III was set for $500,000 in court on Wednesday, February 12. Youth court will determine if Sasser III will be tried as an adult.