The state looks at on-time graduation rates, but the graduation matters team wants the public to look at the completion rate.

Great Falls Public School Superintendent Tammy Lacey said that for many years, GFPS has lagged behind the state in on-time graduation rates.

“It was not news this year,” Lacey said. “Once again we lagged behind the state.”

Lacey said the completion rate is the rate the public should be looking at when it comes to graduation numbers.

“This is the rate that is the parentage of students who reached that goal of getting a Great Falls Public School diploma, not necessarily in the four years that is allowed to them under the four year cohort graduation. They are given the summer and a little bit more time,” she said.

Lacey said she is proud of the number and it shows what the educators are doing every day to keep students in school.

“Well we have had a dip in the four year adjustment, you can see that our completion is headed in the right direction,” Lacey said.

C.M. Russell Principal Kerry Parsons shared the story of one student who during his freshman year had a full course load and ended the year with 3.3 grade point average.

Parsons said the student faced adversities over the summer and ended up homeless.

“In order to save this young man, Montana Youth Challenge in Dillon was the only place to go. Here is a student who just months earlier was in honors courses and was preforming well,” Parsons said.

Parsons said a lot of students do not return to a traditional school setting to receive their diploma, but this young man had his mind set on coming back to Great Falls. 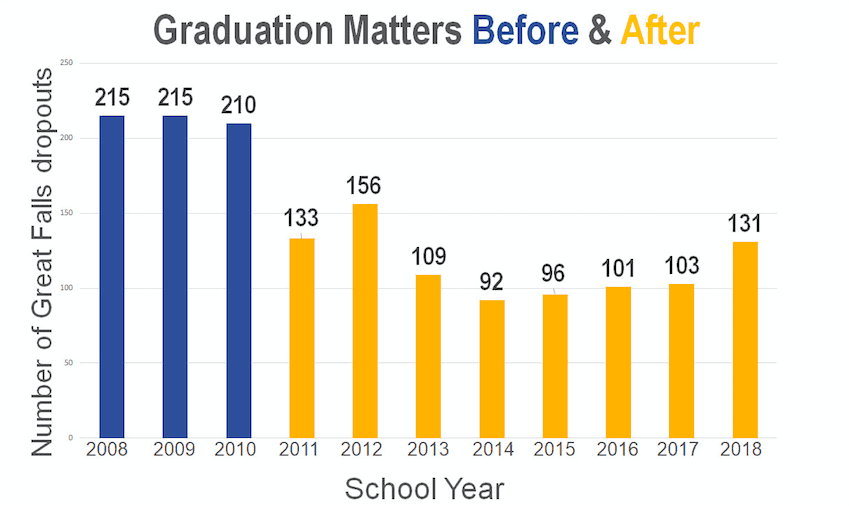 Parsons added he did very well in Dillon and he returned to Great Falls to enroll at C.M. Russell High School.

“I was fortune enough to shake his hand last spring at our commencement ceremony. He graduated with a 3.2 grade point average,” Parsons said.

Parsons said the student is currently at the University of Montana.

Staff also talked about the programs they have developed in their schools to help those who are unable to get the help and support they need to graduate.

Paris Gibson Education Center Principal Drew Uecker shared another story of success about a student who after living on the streets came back to school to get his diploma.

Uecker said the student missed so much school that they asked him to leave, but Uecker always told him when he was ready to come back, the door was open.

One morning, Uecker found the student in his office and four months later that student had received the six credits he needed to graduate,

“He worked his butt off. We got him a place to live. We got him food. We got him through some of those barriers that helped him get to where he needed to get to. He is a taxpayer today. He is married and has a child. That child is attending as a kindergartener at one of our schools. They are active participating parents. They are not upset or afraid to go to school. They are exactly what we want.”

But there is always room for improvement when it comes to keeping students in school.

United Way has teamed up with the district and they will focus on getting students to school by having community members adopting neighborhoods to encourage attendance.

Paris Gibson Education Center is also home to a new immersion school, which helps Native American students  learn not only the different subjects in school, but also about their culture.

The district will hire another homeless coordinator who will connect with homeless students and their families.

GFPS is also working to promote and increase funding for consumer and technical education programs, which saw a 97 percent graduation rate.

United Way is also starting a pilot program called Strive for Success, which will match mentors with high-risk sophomores. The mentors will stay with the students until they graduate high school.