In Great Falls, most metered parking is limited to two hours, and the city keeps track of the time limit by marking car tires with chalk.

According to CNN, after a Michigan woman received 15 parking tickets in three years, she decided to take action and sue.

Each time she received a parking ticket, her car tires were chalked by a Saginaw parking enforcement officer to keep track of how long she’d been parked.

In 2017, not only did she sue the city of Saginaw, Michigan, but also the parking enforcement officer, arguing they had violated her Fourth Amendment right to be free from unreasonable searches. 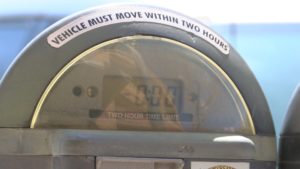 A district court dismissed her case, but a federal appeals court found that chalking for parking enforcement is indeed unconstitutional, according to CNN.

In recent years, cities have begun to use technology to monitor parking, rather than using the chalk-method. CNN reported the new technology methods include taking pictures of the car, license plate readers and other computer software to track vehicles.

As for here in the Electric City, Great Falls Planning and Community Development Director Craig Raymond said, “We’re evaluating the Sixth District Court and evaluating its applicability to Montana, because Montana is not in the sixth district. We’re determining what steps the city should take, if any.”

The Sixth Circuit Court of Appeals has jurisdiction over federal appeals from Kentucky, Michigan, Ohio, and Tennessee. Montana is a part of the Ninth Circuit.