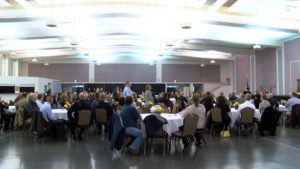 This year’s ceremony was held during National Police Week to honor officers who are no longer with us, as well as those who continue to excel in their positions.

Twelve officers received awards during the ceremony with eight being honored with Lifesaving Awards.

Other awards given out were the Award of Commendation, Award of Merit, The Honorable Service Award and Officer of The Year Award.

Master Police Officer Aaron Frick received the Award of Commendation for talking a robbery suspect out of completing suicide or harming someone else.

Master Police Officer Donny Gerhart received the Award of Merit. Judge Bolstad nominated Gerhart for his unwavering professionalism and compassion both in and outside of the courtroom. Bolstad cited Gerhart’s efforts to improve security for the court staff, the courtroom, and the Civic Center.

Master Police Officer Tom Halloran received Officer of the Year Award. Halloran is celebrating 10 years with the department and has served on the High-Risk Unit and the Investigative Services Bureau. He was promoted to Master Police Officer and received commendations for his performance in the Patrol Services Bureau where he is currently assigned. Halloran is credited with creating an innovative hand-to-hand training program called Arrest, Control, Combatives, Survival and getting a new, less lethal, tool added to the list of equipment approved for officers to carry.

Not only were police officers honored at the ceremony, two citizens were also recognized. Justin Dagsen and Ruben Perez earned Citizen Lifesaving Awards as they both aided a community member in crisis and likely prevented them from completing suicide.