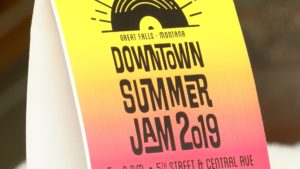 The first of three concerts in the Downtown Summer Jam concert series goes from 5 to 10 p.m.

Mize is from Clearwater, Kansas, and has deep musical roots in his family.

His great uncle was Billy Mize, who is largely known for crafting and evolving the legendary Bakersfield sound, which included musical pioneers Merle Haggard and Buck Owens.

Mize’s album “Come Back Road” debuted in the top 20 Billboard country albums and reached number two on the iTunes country charts in 2017.

He has played with several country stars including Blake Shelton, Lady Antebellum, The Band Perry and many more.

Mize said, “I am most looking forward to seeing a bunch of happy people down here having fun, really excited to play for the great people of Great Falls.”

The opening act for Mize is country musician Devon Worley.

This is her second time being an opening act in Great Falls for the Summer Jam concerts. Last year she opened for Cadillac Three.

Devon said, “We’re so excited to be back!”

She added that she really enjoys all the good food in Great Falls while she is here.