BILLINGS – Bud LaCounte was determined to return to Normandy for the anniversary of D-Day and not even an emergency hip replacement could keep him from completing his mission.

The 96-year old World War II veteran from Billings took a fall shortly after arriving in France this week and shattered his hip, but he was still there Thursday for the ceremonies overlooking the beach he landed on 75 years ago.

MTN News caught up with LaCounte as he prepared to head to the D-Day ceremonies in Normandy for the sixth time in his long life.

“I was going to wait and go back for the 80th anniversary, but I thought that’s getting pretty damn optimistic on my part,” he laughed. 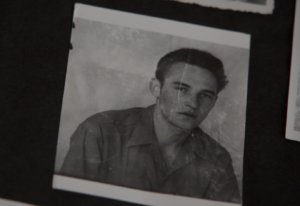 He first set foot on Omaha beach on June 7, 1944—the day after the allied invasion began.

“When I landed the chaos on that beach was just unbelievable. There was more dead and destroyed equipment, trucks burning. A guy can’t describe it because you don’t see very much of it. First place, you are so damned scared you can’t see,” he said.

Willard “Bud” LaCounte had already been through a lot before that June day at the beach. A Chippewa Indian, he was taken away from his parents at the age of 6 and sent to the Fort Totten Indian School in North Dakota.

“They were going to take the Indian out of us and make white folks out of us or something was their intent. So they gathered up hundreds of little kids, five, six and seven years old. Where I was there, there was about 400 little kids.”

He wouldn’t see his parents again for nine years.

At 18, LaCounte hopped a freight train from Montana to Seattle and then took a ship to Alaska to work construction on a submarine refueling base in Dutch Harbor. That’s where he got his first taste of the war.

“I was working up there when the Japanese bombed us up there. They really raised hell,” he said.

A short time later, LaCounte was drafted and assigned to an Army anti-aircraft unit. Just days after his 21st birthday, he was driving a jeep off a landing craft and mostly underwater onto Omaha Beach.

It’s a day he will remember for a couple of reasons.

“When I saw the chaos and realized what we were doing, it scared the living hell out me. But at the same time, I didn’t know they had taken my wife to the hospital in Williston and it had scared the living son out of her,” he said.

Ironically, Bud’s unit didn’t have to fire a shot on the beach that day. Germany had run out of planes at that time.

Still he remembers the carnage of the battle – the destroyed equipment and the dead bodies that he saw buried in trenches.

He ranched for 40 years and was married to his wife, Venice, for 67 years before she passed away.  At 96, he still finds his way to the dance floor regularly, where Bud is always a favorite.

“He is just an awesome man. I love to sit and listen to him and his stories. From the time he was six years old and was taken away from his family to now when he is 96. And all the places he’s been and seen. He is just interesting. He is an awesome man,” said his friend Becky Webb.

LaCounte’s great-grandson, Johnathan Pfeiffer, is also now a member of the military. 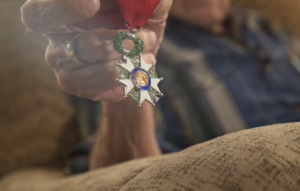 “Once I became of age and started to look into the military, that became a big factor in wanting to follow in my great-grandfather’s footsteps and be able to serve in the military just like he did,” Pfeiffer said.

In 2013, LaCounte was awarded a Legion of Honor medal for helping free France from the Nazis and turn the tide in World War Two. One more accomplishment in his long life.

”I ended up doing a lot better than I thought I would,” he reflected. “I thought if we could make a good living for the family that was it, but I’ve gone way beyond that and it’s a good feeling except she (his wife Vivian) should be here to enjoy it.”

Seventy-five years after that fateful day at the beach, there is still reason to be grateful for men like Bud LaCounte, who made it home to tell his story– and also for all of those who didn’t make it back.