YELLOWSTONE NATIONAL PARK – Vice President Mike Pence continued his visit to the west on Thursday, spending the day in Yellowstone National Park. The focus of his visit was taking care of the park.

When Vice President Pence and his entourage arrived at Old Faithful, they were greeted by several officials to get a sense of what goes on in Yellowstone.

“(There are) hundreds of miles of roads, hundreds of backcountry campsites, bridges, tunnels and other infrastructure that have helped open up Yellowstone to the wider world,” said Pence. “It’s amazing to think of the impact this has had on the region and the enjoyment of the people of the United States of America.”

Thursday’s topic in Yellowstone was infrastructure. 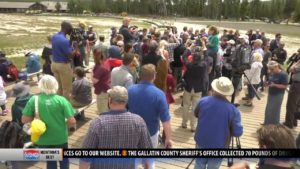 Old Faithful lived up to its name, putting on a show as Pence spoke to the crowd.

“We’ve actually proposed what will be known as the Public Lands Infrastructure Fund,” Pence said. “Under President Trump’s leadership, we will dedicate 50% from all of the revenues of all the leases on public lands to improve and maintain the infrastructure of our national parks.”

But after the talking was over, there was some work to do.

The infrastructure they were talking about includes some of the boardwalks at Old Faithful, a boardwalk that has started to fall apart.

When asked about budget cuts to the Department of the Interior, the vice president said the infrastructure proposal will be a solution.

“We believe that the combination of the investments that we are making is exactly the right level,” Pence said. “But the historic investment that we will be making in maintenance, by literally creating a funding stream for maintenance from our public leases, we believe will more than meet the maintenance obligations of our national parks.”

Pence said the Public Lands Infrastructure Fund has broad support from both sides of the aisle back in Washington.

Pence noted he and his wife Karen spent a week in Yellowstone several years ago on a family vacation. They return to Washington, D.C., this evening.