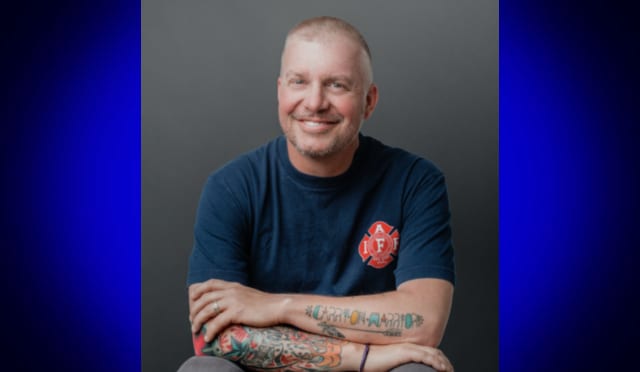 Baker was born Sept. 9, 1973, the second eldest of four siblings. He graduated from Fort Benton High School in 1992.

Jason met his future wife, Jill, in middle school, and they always enjoyed each other’s company. He helped her move into the dorms at the University of Montana, and by the end of their freshman year, they were dating. Jason and Jill were married 23 years.

Jason loved being a father to daughter, Peyton and son, Porter. He wanted to be involved with everything they did while avoiding helicopter parenting. Supportive and loving, he showed up for concerts, cross-country meets and football games. He instilled in them generosity and the value of hard work. He also made sure they had practical skills. He wanted them to be competent adults, and when he knew how limited his time would be, to be able to do things without him.

Jason began his firefighting career as a wildland firefighter in the Seeley Lake area during a summer break from the University of Montana. He became a volunteer firefighter and then found a job with the Great Falls Fire Department in 2000. The fire station became his second home, and the people he worked with his second family.

Baker worked for more than a decade to help firefighters statewide achieve presumptive health and safety coverage so generations of first responders tagged with lung disease and other serious work-related health conditions would have better odds at living a normal life. It’s a fight that continues.

Jason had to retire from the GFFD in December 2017, and he embraced his new role. He became a taxi service for his children, made his family dinner and helped his kids with their homework.

Jason had a gift for storytelling, often with embellishment to make the stories especially good. He had a contagious smile and ease making new friends. He was a prolific jokester. Some of his practical jokes succeeded and some failed, but they were always done in fun.

Jason had a natural affinity for teenagers and an ability to bring those on the end into the fold. He volunteered as a co-leader for the Christ United Methodist Church youth group, was a counselor for Methodist camp on Flathead Lake, coached Salvation Army flag football and Boys and Girls Club football teams and connected one-on-one as a counselor at the Muscular Dystrophy Association summer camp in Montana. He also organized for many years the local firefighters’ MDA boot drive. He helped launch the coats-for-kids and helped with many other charitable projects through the firefighters’ union. He had a generous heart and was the kind of guy who would give others the shirt off his back.

Jason was big on second chances. He had high expectations for people and wanted them to be their best selves, but he was forgiving, too. He didn’t give up on people, and that’s part of why they loved him.

Even before his diagnosis, Jason made the most of his time, treasuring moments with family and friends and going on adventures. He went to concerts, cheered on his sports teams (Chicago Bears, Washington Capitals and New York Yankees) at their games and rode motorcycles for fun, for camaraderie and for “wind therapy.” One of his special motorcycle trips was a ride with other Montana firefighters to New York City for the 10th anniversary of the Sept. 11 attacks.

Jason would have liked to have gone to Ireland or Boston for St. Patrick’s Day, which he often celebrated in Butte and always made a grand occasion with the parade and Guinness at the pub. He had a kilt and wasn’t afraid to wear it, even if it wasn’t St. Patrick’s Day. He even issued the credible threat that he’d pick Peyton up from school in his kilt.

Jason didn’t die with regrets because he said what needed to be said and lived honestly. He didn’t have unfinished business and told a nurse who asked him what he wanted to have done, “I’ve done it.” He only held on as long as he did to be with his loved ones.

During his last two years, Jason said that as a firefighter one of the strengths he developed is being able to adapt to rapidly changing conditions. He knew courage can look like running into a burning building, but it also can look like getting up every day and fighting cancer. Courage can be continuing treatments that are painful and sickening. Courage can be taking another ride on the motorcycle or grilling dinner for your kids when all you want to do is collapse.

About every possible side effect of his treatments seemed to happen to Jason, which was hard on his body and spirit. Still, he made the most of each good day he had. Before leaving the hospital for hospice, Jason had a surge of energy. He started telling stories to the dozen people gathered in his room and soon they were rolling with laughter. Moments like that were where he thrived. His joy was in making other happy and hearing them laugh.