Haley campaigns in Great Falls for Daines and other Republicans 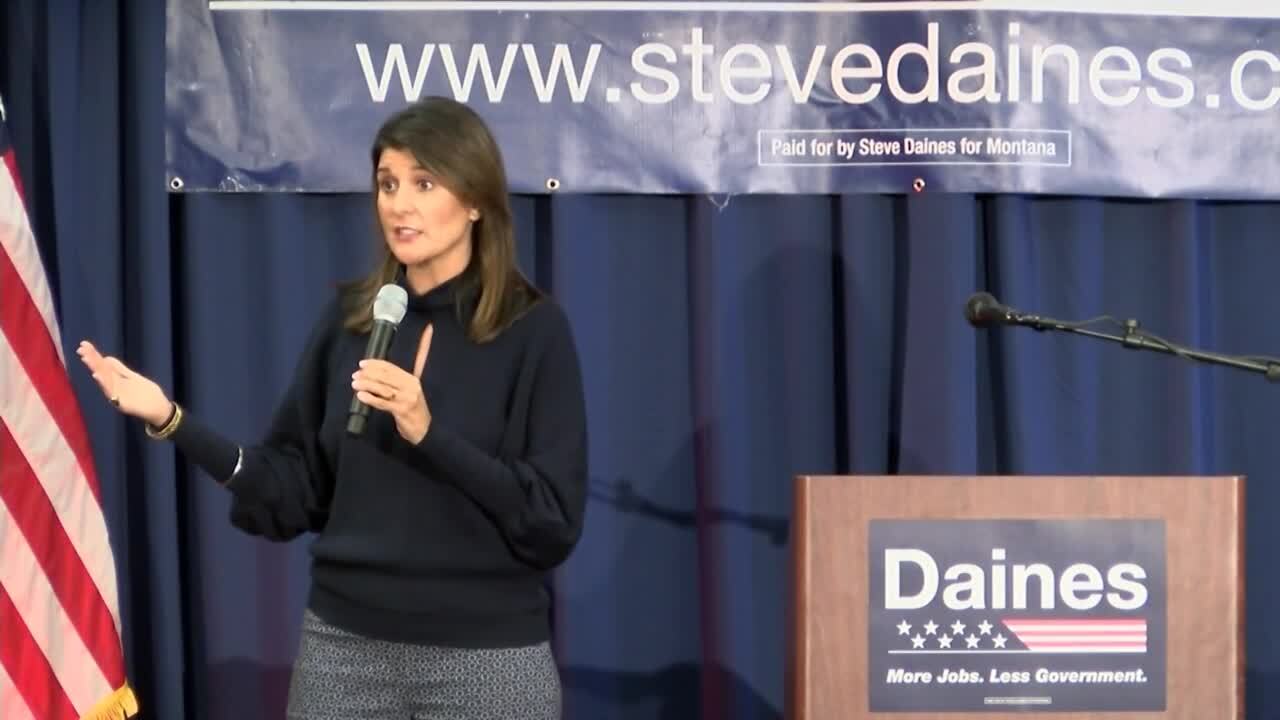 Haley spoke to a crowd of about 30 people, giving her endorsement of several Republicans running for office in Montana, including gubernatorial candidate Greg Gianforte and U.S. Senate candidate Steve Daines.

Daines was absent from the event, heading to the Washington DC for the upcoming Senate vote on Supreme Court Nominee Amy Coney Barrett.

Haley talked about the important position that Montana voters are currently in, with the opportunity to give one side a partisan majority in the Senate. “All eyes are on Montana, because of this senate seat,” she said to the masked crowd. “Why? It’s the 51st vote. It’s the vote that will shift the majority, that’s why everybody’s watching this.”

Haley was the first Indian-American presidential cabinet member in U.S. history. Her tenure began in 2017, and she resigned amicably in 2018. Prior to her post as U.N. ambassador, she was the Republican governor of South Carolina.

Fact Check: Bullock has said he would be open to potential measures including adding justices to the bench if Amy Coney Barrett were to be confirmed and added to the Supreme Court, a confirmation process that Bullock does not support. The Governor did veto House Bill 146 in 2019, which would have banned sanctuary cities in Montana. However, in a letter from the Governor to Secretary of State Corey Stapleton, Bullock explains that he did not believe the bill was necessary because there are no sanctuary cities in Montana. In the letter, he goes on to add that HB 146 is “a solution searching for a problem. In the process, it creates problems of its own.” According to the Center for Immigration Studies, a non-partisan research organization, this is true; there are no sanctuary cities in Montana. The closest sanctuary cities are in Spokane County, Washington and Wallowa County, Oregon. As for the tax increases, Bullock’s 2020-21 budget plan did propose $100 million in new taxes to help pay for $290 million in infrastructure projects. As part of the budget, the Governor proposed increasing state taxes or fees on lodging, rental cars, liquor, investment advisors and tobacco. (More info: https://www.krtv.com/news/montana-politics/2018/11/16/gov-bullock-unveils-2020-21-budget-with-some-new-programs-and-tax-increases/) In 2017, Governor Bullock did pass House Bill 391, which established a Montana Earned Income Tax Credit. HB 391 provides for an “Earned Income Tax Credit.” On top of a similar federal tax credit, this bill gave an additional tax credit to low-income workers. (Details: https://news.mt.gov/governor-bullock-joins-montana-working-families-to-highlight-tax-cut)