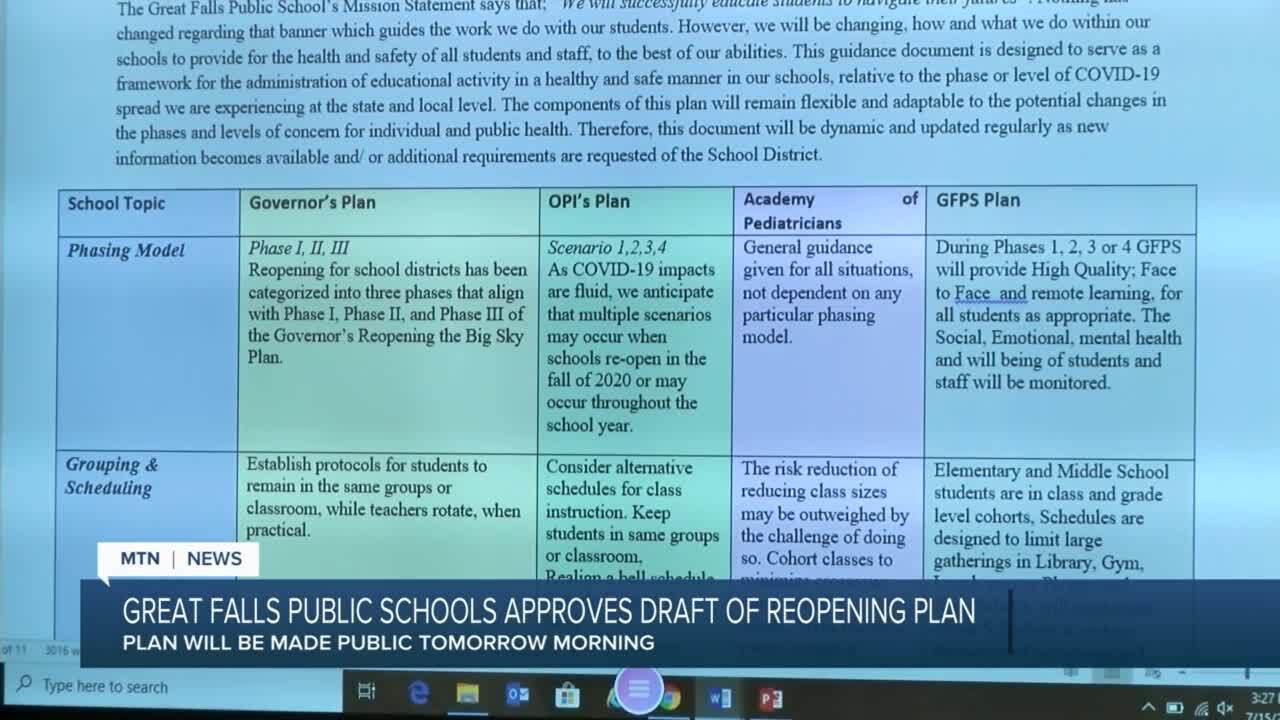 GREAT FALLS — At a special board meeting on Wednesday, the Great Falls Public Schools Board of Trustees outlined its draft plan to reopen schools this upcoming semester. The plan, according to Superintendent Tom Moore, is based on state and local health regulations, as well as input from Cascade City-County Health Officer Trisha Gardner, board members, and data from other sources.

At this point, the plan is still a draft, and will not become official until August 10 at the next board meeting. But what happens between now and then is an important step in the process.

The plan will be released on the GFPS website on July 16 at 11:00 a.m. at which point Superintendent Moore plans to go live on the school district’s Facebook page to formally introduce the plan, walk the public through the steps that the school district intends to take to keep teachers and students safe, and answer some questions from viewers.

It’s important to remember that this is still not the official district reopening plan, and it is subject to change over the next three and a half weeks as comments, questions and concerns are collected from district employees, students and parents.

According to Moore, this plan has been under construction since April, even before the previous semester concluded. He says that the best way for the public to give feedback on the plan is to send a message directly to the Superintendent’s email. There are also public comment sections at all GFPS board meetings, although anyone wishing to speak must fill out a “Request to Comment” form prior to the meeting. Additionally, changes are expected to be made between now and August 10, and it is unclear if any changes will be made at the next board meeting itself.

Regardless, the district is inviting the public, especially GFPS teachers, students and parents to read through the plan and comment on it. Moore also added that the plan will be sent directly to teachers in the coming days to ensure that they are comfortable with what will be asked of them, especially as it pertains to cleaning school property, social distancing, mask policy, and other important health-related guidelines.

You can see some of the highlights of the preliminary plan that were introduced at the meeting in this Twitter thread:

The Great Falls Public Schools Work Session is underway. The district’s plan for reopening this fall will be introduced, discussed, and possibly changed before it is formally announced and put into place at a Board Meeting tonight at 5 P.M. #mtnews (@KRTV)