Montana unemployment website is back online after "astronomical" number of requests 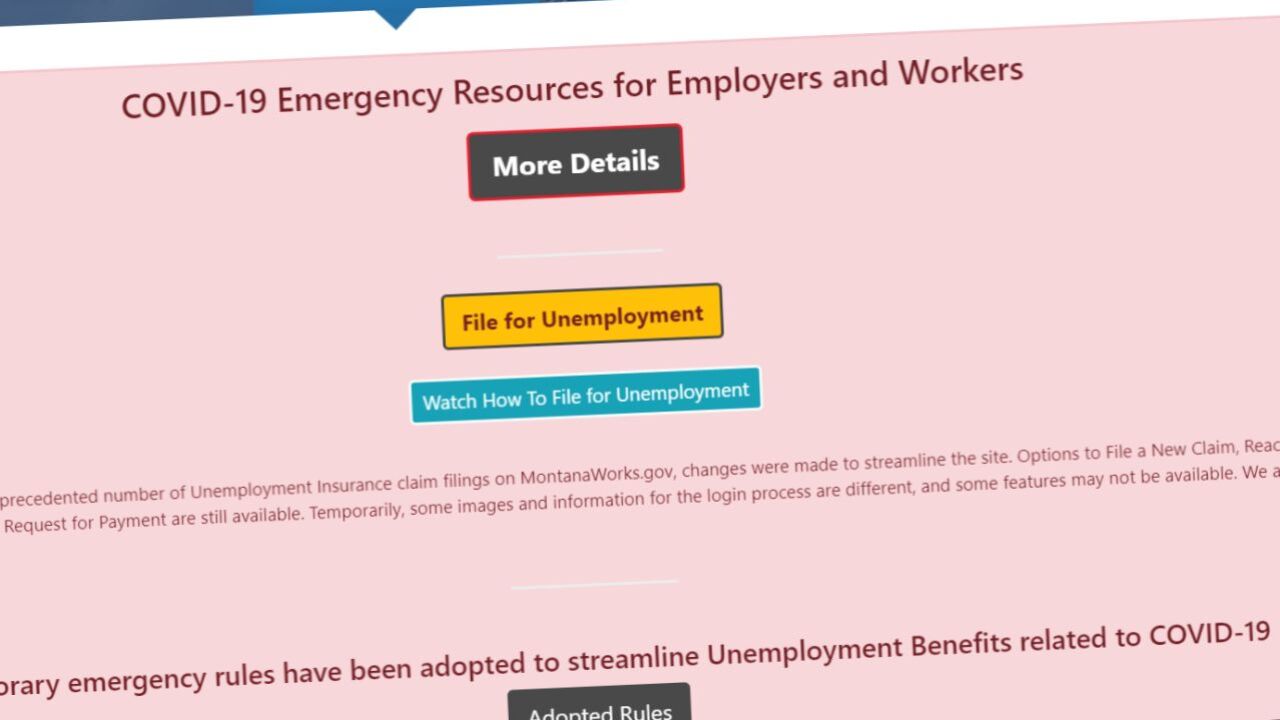 BILLINGS — Unemployment benefits are coming to Montanans who have been laid-off due to closures and restrictions caused by the COVID-19 (coronavirus) pandemic, despite an influx in requests that temporarily crashed the state website to file claims.

Governor Steve Bullock ordered the closure of all restaurant dining rooms and all bars and casinos along with many other types of businesses that are designed for "socializing." Many have been forced to close their doors or reduce staff in order to deal with the situation, leaving thousands of workers in Montana without jobs for the foreseeable future.

After Bullock declared a state of emergency, the state quickly implemented new rules aimed at streamlining and speeding up the process for people filing for unemployment.

"The rules allow a claimant directed by their employer to leave work or not to report to work due to COVID-19 to qualify as being temporarily laid off and eligible for benefits; claimants are not eligible for benefits if they could work from home but choose not to," said Brenda Nordlund , the acting commissioner of the Montana Department of Labor & Industry.

Unemployment benefits in Montana usually take around 14 days to kick in, but due to the emergency declaration, unemployment offices can now get people hooked up with their benefits within half the time.

"Normally it would be about 14 days. We can cut that short at least seven because we have eliminated the waiting week with the emergency rules," Nordlund added about the new time frame to receive benefits

As of Tuesday, Nordlund said the website MontanaWorks.gov is up and running again, but still probably somewhat slow.

“We’ve had unprecedented numbers, as you know,” said Nordlund. She explained that the amount of requests last week was astronomical: more than 13,000 claim filings started to overload the website last week. "We put all of our resources that we could into stabilizing Montana Works.gov," she said. “So a lot of folks got pushed through, even though they did encounter intermittent, recurring frustrations and interruptions in service.“

Many filers were met with a slow and sometime unresponsive webpage.

Nordlund said the tech team worked for 36 hours straight to strengthen the site to streamline and simplify connectivity issues. On Sunday and Monday alone, more than 12,000 requests for payment were pushed through.

“I can’t imagine how many are feeling, and how frightened they may be, but please know that the UIT and the Department of Labor will bend over backwards to try and serve your needs,“ she said.

If a filer can’t access the site to check or start a claim, Nordlund said the department staff will backdate claims so people don’t lose money.

When asked how many more claims may come into the website in the coming days, Nordlund said she couldn't predict, saying the activity on the website has been "unprecedented." She added, "Our numbers tick up every day."