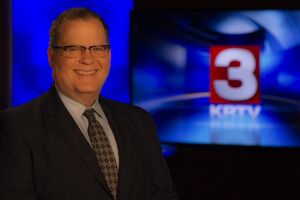 Tim McGonigal has been a member of the KRTV news team since January of 2008.

Tim grew up in Helena and is a 1984 graduate of Helena High School. He attended Carroll College for a year before completing receiving his Bachelor of Arts Degree in Mass Communication from Eastern Montana College (MSU-Billings) in 1989.

Tim worked in radio for several years in Billings, New Mexico, and Bozeman before becoming the sports anchor at KCTZ-TV in Bozeman in 1994.

He later worked at KTVH in Helena as an anchor, reporter and producer before becoming News Director. He also worked as a News Director in Kirksville, MO and Austin, MN before moving back to Montana to become Communications Director at the University of Great Falls (University of Providence).

Tim returned to television as News Director at KRTV and helped launch successful newscasts for KXLH in Helena before heading back to the anchor desk.

Tim’s career at KRTV includes award winning reporting on Governor Steve Bullock’s trade missions to China, Taiwan, and South Korea. In 2016, he also accompanied a group of Montana artists on an exchange to China. He has also reported from the World War Two Memorial in Washington, D.C.

Although he’s interviewed a number of notable people including Tom Brokaw, Dick Butkus, and Ken Burns, Tim most enjoys telling the stories of everyday Montanans.

Tim has been married to his wife, Nancy since 1988. They have two grown children, Molly and Evans. They are also proud parents of two Corgis, Ozzie and Tanzi.

Tim is actively involved in the Great Falls community as a member of the Great Falls Rotary Club and the Knights of Columbus. He has also served as a board member for Family Promise of Great Falls and has worked with the Alliance For Youth.

As a native Montanan, Tim loves hunting, fishing, skiing, golfing and all that the Treasure State’s great outdoors have to offer.