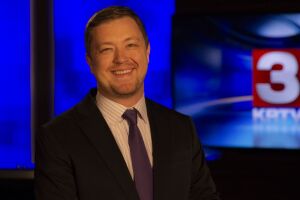 Tom Wylie joined the MTN News sports team in June of 2014 and holy moly, he couldn’t be happier to be back in the Treasure State. Tom spent the past two years in the deep South as the Assistant Sports Director at WJBF-TV in Augusta, GA .

Tom was raised in Bozeman, MT so living in the south was a life-changing but incredible experience. While in Augusta, Tom was fortunate enough to cover two Masters tournaments and even had a chance to fulfill a life long dream and play the course at Augusta National twice.

Tom has covered NFL, SEC and ACC football, and drove a NASCAR at the Charlotte International Speedway. He has interviewed sports legends like Gary Player, Bill Walton, and William “Fridge” Perry. But his best experiences come from watching north central Montana teams and athletes win state championships. When not at work, Tom is spending time with his wife Tianna criss-crossing the state to visit friends and family. Oh yeah… and Tom’s mother wants him to mention that he was nominated for a 2013 Southeast Emmy award for his work on “WJBF Football Friday Night”. He also won a Georgia Associated Press Award for a story on a South Carolina high school basketball player who was granted a 5thyear of eligibility after missing a season due to a cancer diagnosis.

Please feel free to contact Tom with story ideas or just to chat! His e-mail is tom@krtv.com, or you can follow him on Twitter: @WylieTom Keep up with all of the action at MontanaSports.com!